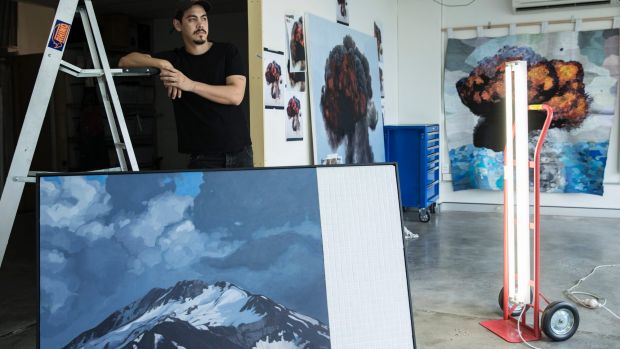 All We Can’t See: Artists seek to bring refugee misery into focus

In 2016, the largest set of documents leaked from inside Australia’s immigration detention system were released. Detailing more than 2000 incident reports from the Nauru detention centre, the so-called Nauru Files were written by guards, caseworkers and teachers. They detail self-harm, sexual assault, child abuse, hunger strikes, assaults and other injuries.

Now 33 Australian artists are joining forces to give a human face to the numbers on the pages. More than a year in the making, All We Can’t See, initiated by Arielle Gamble and Daniel New, is a collection of works that aims to raise awareness of the human cost of Australia’s offshore processing policies.

For artist Ben Quilty reading the files was a harrowing experience.

“When they [the files] came out I was shocked, and then ashamed,” he says. “It’s a very, very dark passage in our shared history as Australians, that these people are suffering under our care.”

Quilty, who won the 2011 Archibald Prize and travelled to Afghanistan as Official War Artist of the Australian War Memorial, believes art can help promote more understanding about the plight of refugees.

“I’ve been through most of the refugee camps around Syria, Lebanon, Jordan,” he says. “I’ve watched people that came ashore in Lesbos, Greece. I’ve followed refugees up through Serbia and on their way to Germany. What I think artists need to do now is try and humanise things, It feels to me like most of our recent governments go out of their way to dehumanise issues.

“The Australian public needs to understand that seeking refugee status means you’re fleeing a very real horror and danger. They [the public] have completely lost empathy and compassion.”

Another contributing artist, Luke Sciberras, echoes Quilty’s call for a fresh emphasis on our shared humanity.

“The fundamental role of art is to make the invisible visible,” says Sciberras. ​”Before I started to think of the broader contemporary picture, I was touched by the resonance with my families’ memories. All four of my grandparents come from refugee and migrant backgrounds. I understand what it is like for people to be hauled up in a refugee camp, my family lived through that as well.”

The difference, he says, is that his family were given the freedom to “wander the streets and make a life for themselves”.

“They had dignity. And in every one of these files that I read, the degradation of hope and self-worth is so extreme. I find it embarrassing.”

Four-time Archibald finalist Abdul Abdullah says his contribution is a direct response to one of the files and also explores the wider effects of life in detention.

“It is largely a response to conversations that I’ve had with people seeking asylum in Australia, and their memories of being in detention and memories of where they’ve come from.”

For Abdullah, the artists’ work can bring to life the files and the trauma of the refugees.